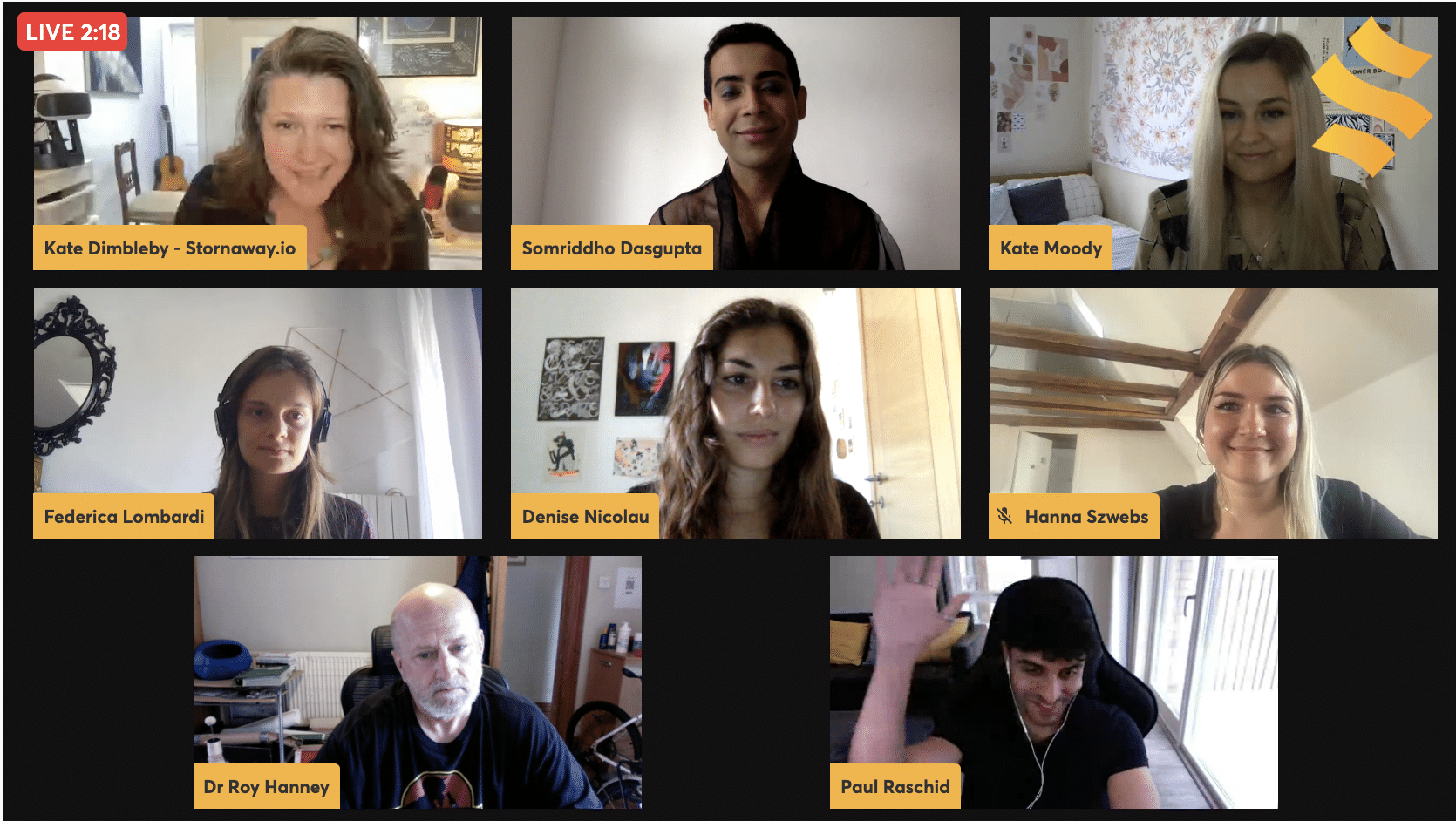 7 Top Tips From Filmmakers To Help You Create Interactive Videos

Last month, we had the pleasure of hosting a roundtable discussion for the 2021 Encounters Film Festival. At the table were four young filmmakers currently kickstarting their journeys to create interactive videos – each had a film screening at Immersive Encounters.

We were also joined by one of the world’s most prolific interactive filmmakers, Paul Raschid and by Dr Roy Hanney, who has extensive experience of leading academic teams and joined higher education from the film and television industry in 1999.

Our panel told us more about why they were drawn to the interactive format and offered their advice on making interactive films.

You can watch the roundtable discussion for yourself here (60 minutes) – it’s packed with great insights. But as a recap or a taster, we’ve compiled a list of the top 7 things these filmmakers thinks you should keep in mind when making your own interactive videos…

1. Hand over the controls … It’s all about Agency

“Audiences are sophisticated these days.” Paul said, “They are used to being able to pick and choose their way through the huge amount of media they watch online.“

Paul Raschid started by pointing out that it’s all about agency. Whatever you are working on – drama, documentary, video game, education and training – the audience/the viewer gets to choose their path through the story. They have the agency.

He explained that interactive video and film not only invites the audience into the room but offers them a seat at the table. Your job as a filmmaker is to play with that relationship – making sure you get them involved and engaged early and challenge them to keep on watching!

“Once we were on set, because we had done all the planning, it was actually quite easy.” – Kate Moody on how planning was key in filming Lost and Found

All of the filmmakers talked about how key it was to research and plan … and then plan some more(!) to ensure that their interactive films would make sense to their audience. So that they would capture the right footage when it came to shooting.

With Stornaway.io, filmmakers are able to map out their entire project before they have filmed a single shot. Planning out the story islands, choices, variations and taking the sprawling map off of the whiteboard – or the kitchen wall – and managing it in the platform where the videos can be uploaded as soon as they are ready.

Starting with audience research and flowcharts, Denise talked about the initial flowchart for The New Normal – “We started building a flowchart, that was really massive – I think more than double than the one you can see on Stornaway. It was really huge … Once we had our prototype, we found that Stornaway.io could be the right tool for us.”

The story map is at the heart of the planning – here are some examples of the maps created in Stornaway.io.

The story map was key in filming Lost and Found. Check out the story map students at American University created for their multi-story collection 7 Circles (watch the films at Immersive Encounters). 3. Is it affect or effect? … When you make interactive films, it’s both!

Dr Roy Hanney talked about the importance of thinking about where to put the decision points in your video – is the viewer effecting what happens next or affecting. It’s a topic he presented to filmmakers around the world at the recent Interactive Media Festival.

“I’ve always been quite a plot-driven director,” said Paul, “with something like Deathtrap Dungeon, the emphasis on the decisions has to be effective because it’s about survival. But the affective decisions are where you get the audience invested.“

There has long been a debate in the games industry about needing to ‘reward’ the viewers/player. Press this, win that, Hit that, get a reward. But, as we are seeing increasingly, interactive films are providing evermore diverse ways to engage the audience.

Both Raschid and Hanney talked about finding the decision points – the places of tension in your story – how you can find different ways to draw the audience in.

Do their choices effect or affect what happens next?

4. Use interactive video for education and learning

“I wanted to give the audience the option to choose whether they think it’s right or not. So they can have that experience” – Somriddho Dasgupta.

Find me a Girlfriend creator, Somriddho Dasgupta, talked of using interactive video to explore internalised homophobia within the queer community and fetishization of different sexuality. He wanted to educate the viewer about some of the stereotypes around gender and put themselves in the shoes of a gay woman going on a date.

“I wanted to make people aware that these things happen within the queer community.”- Somriddho Dasgupta.

Taking the time to consider how the audience will relate to the characters and the decisions they make for the characters was key to all of the filmmakers. Being engaged in the story presents an opportunity for the filmmaker to educate, whether this is about a particular topic or about the reasons why a character makes the choices they do.

“We wanted to make the interactivity an opportunity to identify with the character and gain insight into her thought process,  into how she perceives the world … putting the interaction into places where you’re most likely to gain some sort of intimate moment with the main character.” – Hannah Szwebs on a key reason for interactivity in Behind Closed Doors.

5. Don’t let the audience go too long before making a decision

“In that very first minute, you’ve got to give the audience their training wheels, you’ve got to help them know who they are in this story and why they’re there and what they need to do” – Kate Dimbleby reflected on the idea that filmmakers need to introduce some members their audience to this format of storytelling.

A common mistake many people make when first making interactive videos – leaving it too long between decision points. In Paul’s interactive Rom-Com, Five Dates, there was just 1 minute between each audience decision.

6. Don’t lose your cast and crew – Previs and help actors understand through visualising how the game engine will work

“At first, she was a bit confused … the more we told her, the more options we gave her to come with feedback on how her character would act, the better the story actually became.” – Hannah Szwebs described how including her actress in understanding the nature of the film was important in Behind Closed Doors.

For Paul, getting rough edits straight into Stornaway.io during his latest production, The Gallery, was revolutionary (link to blog), being able to play it through to cast and crew on set meant that everyone was able to understand where they were in the journey. Crew members could be made to feel more comfortable about what was being shot and how that fitted into the final production.

For cast members, this ability to show them exactly where they are was huge :

“They could actually have that mental picture in their head about what it was going to look like with the graphics on the screen and the timer ticking down and what they had to do to occupy that time and once the decision was made the first line of dialogue that they delivered after the jump in the scene to the next decision point.” – Paul on filming The Gallery and using Stornaway.

7. Get your mum/uncle/2nd cousin to watch it!

“Whatever you think your audience experience is, is probably not what their experience is.” – Roy Hanney neatly rounded off our discussion with this incredibly important note.

Testing and planning are vital to the success of making interactive videos and films. Being able to playtest your script before you’ve even got to filming, being able to play through the shots you’ve already filmed in the context of the timeline, being able to

“I found it really helpful to have feedback from our mothers, as said before it can depend on your age as to how you react to this kind of thing, and that was really helpful because it let us rethink the older user experience in the choices and times when we have messages … we had to rethink things and it was really constructive feedback. I would really love to watch people watch the New Normal to see if they actually like it!” – Denise Nicolau on playtesting The New Normal

“Our view at Stornaway is around just playing it – playtest it as soon as you can!” – says Kate from Stornaway.io.

Stornaway.io was created so that you can test your story throughout the entire creation process. From script creation through to the final edits being delivered.

To find out more about how to use Stornaway.io in your own filmmaking, watch our 3-minute getting started video and then Sign up for free today and start using Stornaway.io for your own interactive projects.